The first step in developing a business strategy is understanding the markets the business/product participates or wants to participate in. While the Aploris founders were working as management consultants at Bain & Company, the initial stages of many projects included a thorough assessment of the client’s market. While time consuming to execute, accurately defining a market provides a powerful platform to help hypothesize the impact of a strategy.

Across a variety of projects, there were always a handful of key questions that were consistently used to define markets:

Aploris develops productivity tools for consultants and other PowerPoint users. Our data visualization plug-in for PowerPoint, Aploris Charts (www.aploris.com), allows users to build Marimekko charts, which can be used to effectively communicate market segments and size. 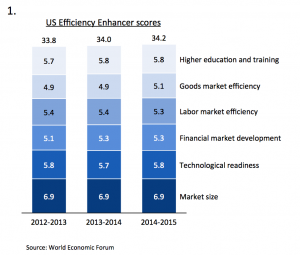 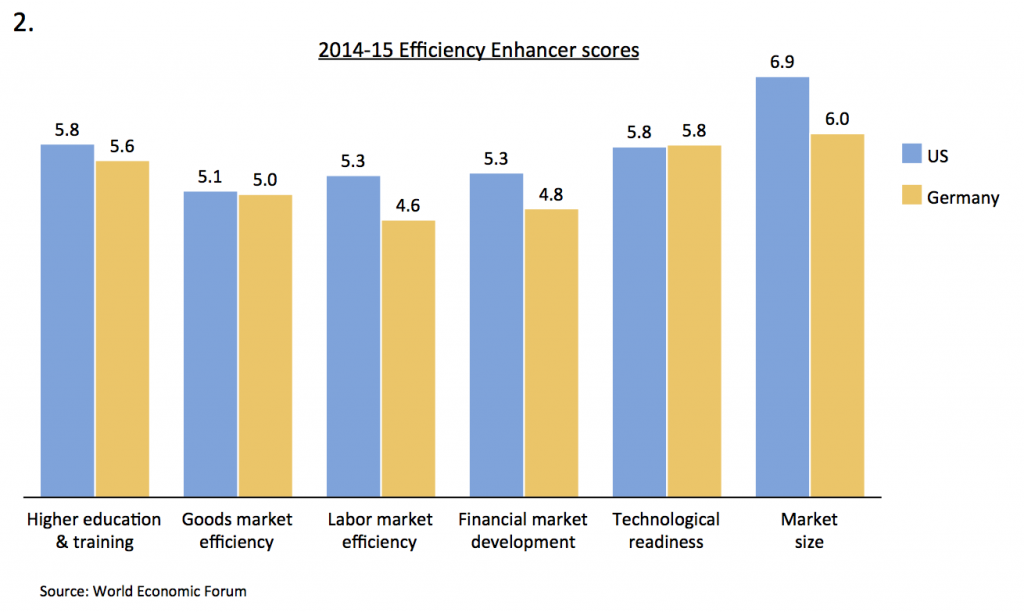 However, there are times where we would like to be able to combine the charts so that we can compactly examine two sets of data where each set is made up of components that aggregate. In example 3 we use a combination stack-cluster chart to achieve this and effective examine the Economic Enhancer components for both the US and Germany across the 3 time periods. 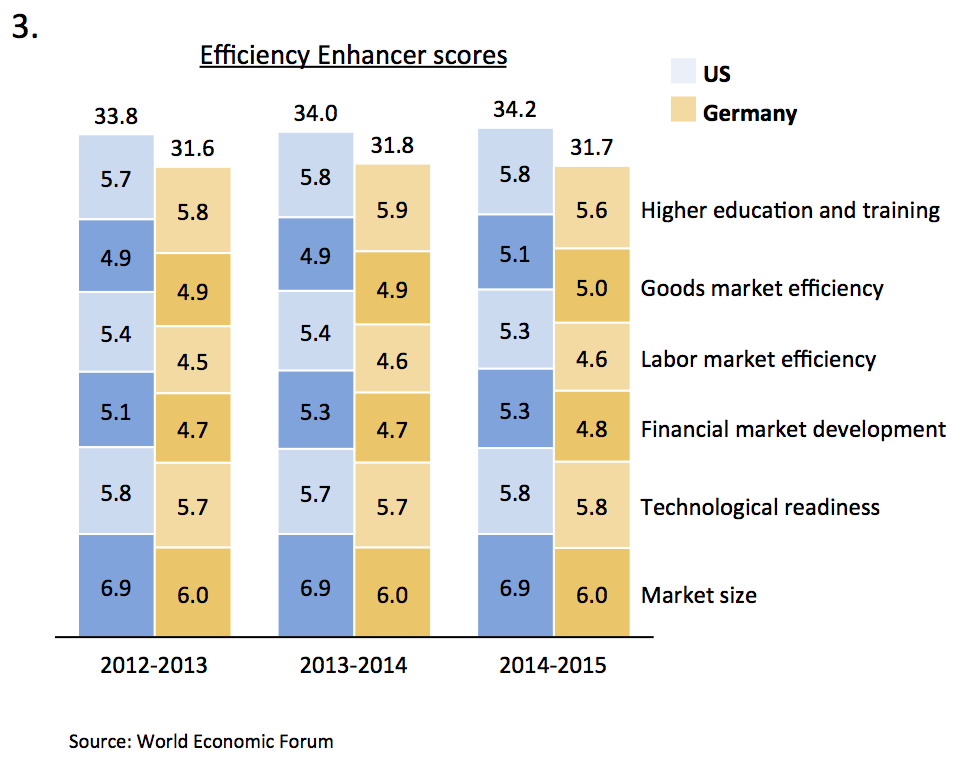 As the name implies, the 100% stacked bar or column chart uses the percent unit for the y-axis. As a result, if you are comparing across multiple groups/bars, each would have the same height taking up the full range of the value axis. The chart is typically used when the author wants to highlight the portion of the total that each segment in a bar comprises. The chart is especially useful when comparing across groups of different sizes or along a timeline. In the example below, we use the 100% stacked bar chart to examine educational attainment in specific US geographies.

Relative to the rest of the US, a higher portion of Silicon Valley and San Francisco residents have a Bachelor, Graduate or Professional degree. The 100% stacked column helps the reader quickly arrive to this conclusion. If we had used a regular stacked chart the American population would have dwarfed Silicon Valley and San Francisco making the key message difficult to obtain. Still the sum displayed on top of each column gives insights into the absolute numbers behind the percentages in the 100% chart.

The 100% stacked bar chart is a standard Aploris offering. With Aploris, the user can switch between regular and 100% stacked bars with the just a few clicks allowing them to quickly test which graph best communicates the intended insight. In addition, Aploris labels can be automatically adjusted to show the absolute value, the percent of the total, or both.

An annotated or data row is a horizontal set of numbers, typically under the chart, that line up with the  columns of the chart. In the US food consumption bar chart below, we use the annotated row to show consumption of eggs per capita. Here the annotated row is especially useful as we can represent different units (number/capita) than those shown in the chart (pounds/capita). Instead of the annotated row we could have used a line-bar chart combination but this chart would not have been as easy to read. Furthermore, the annotated row leaves the visual focus on the primary data. The viewer or presenter may only refer to it in case of specific questions and only for certain data points. 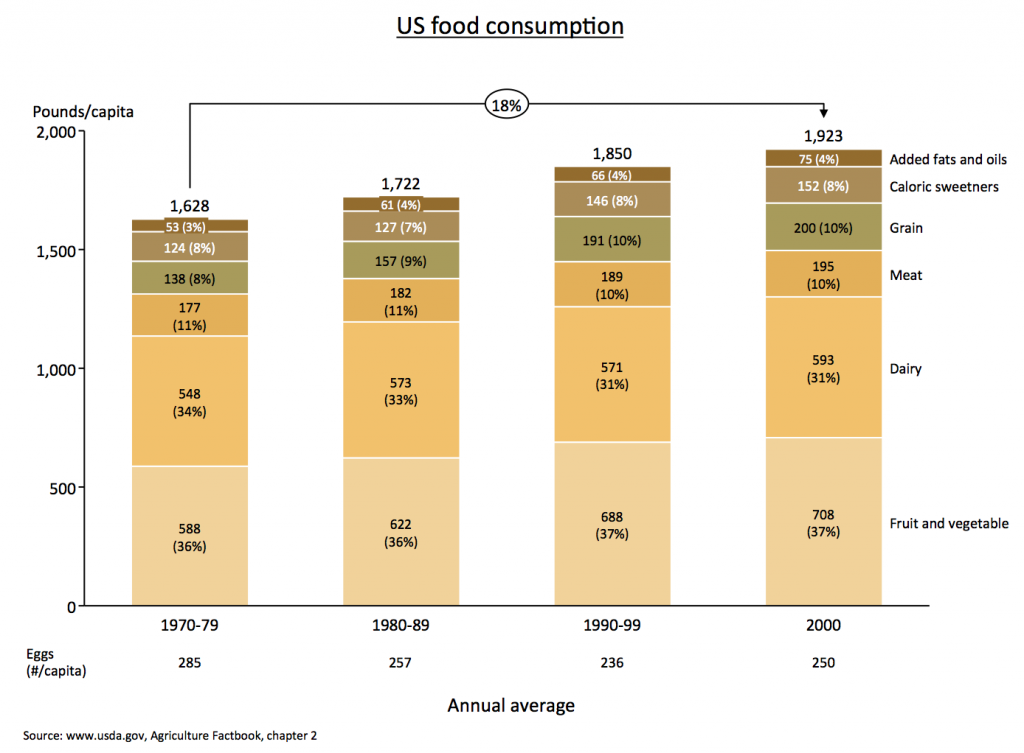 An annotated or data column is a vertical set of numbers, typically to the right of the chart, that line up with the series of the chart. A common use for the annotated column is to show the compound annual growth rate (CAGR) for every segment of a stacked bar chart. In the Microsoft revenue example below we use the annotated column to understand which of Microsoft’s businesses is growing the fastest. Adding this data visually to the chart, e.g. with some type of arrows, may easily become more confusing than helpful. Multiple data columns can be helpful for multiple CAGRs, like an actual one for past years and one projected according to the latest business plan. 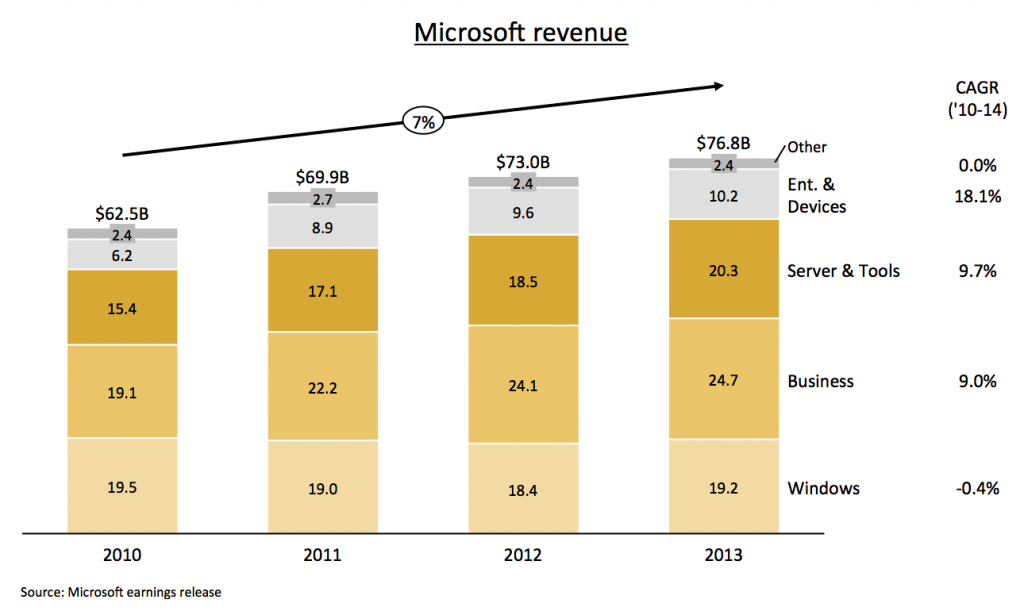 In the example below, we use the waterfall chart to understand Microsoft’s income statement from revenue to net income for 3 months ending September 30, 2014 (source Microsoft earnings release). Throughout the waterfall we use “total bars” to provide an intermediary summation (e.g. gross margin, operating margin). We have also manually edited the labels to only show units for the total bars. 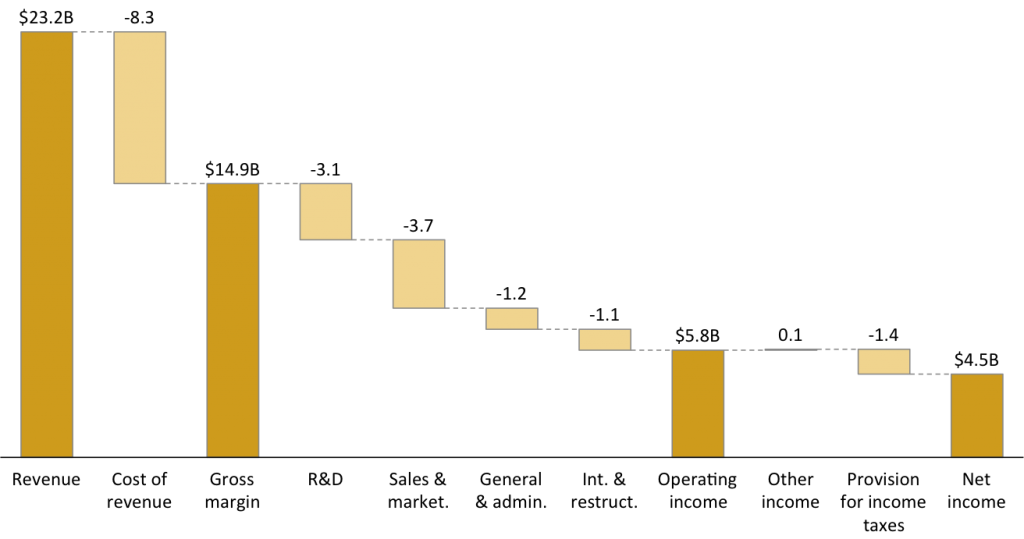 The waterfall chart is a standard Aploris offering on our Mac and PC compatible data visualization software. When editing the chart, simply drag the connectors between bars to adjust the flow of the waterfall.