Flat design, a simple design approach that focuses on usability and readability, has seen increasing popularity recently with Microsoft, Facebook, and Apple amongst others choosing to adopt it. The hallmarks of flat design include two-dimensional illustrations (no shadows) with simple geometry and solid colors.

While Microsoft is often credited to be among the first to apply flat design to its interface, their charts have not been updated yet. In the example below, we compare a simple pie chart with default settings in Aploris (1) and with PowerPoint’s native graphing tool (2):

You will notice that the PowerPoint version has a shadow and all the colors seem to have a gradient. Under the flat design doctrine we would argue that these embellishments do not add any information and therefore serve to distract the reader. In addition, Microsoft’s native charts support 3-D graphs which typically have no place in business presentations and also serve to confuse the reader.

At Aploris, we hope to continue improving our aesthetics but not at the cost of usability and readability. 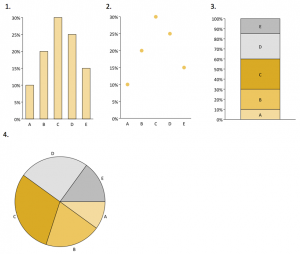