The Mekko chart below shows the number of wearable models available based on where you wear the device and the purpose it serves. Each column represents the purpose and the width is proportional to the number of models available. Each row represents the location of the body where the device is worn and the height is proportional to its share within the column. In addition, we use a data row to show the average price for the devices by purpose.

This chart was built using the Aploris PowerPoint add-in for Mac.

The stacked bar chart below shows the recording industry’s global revenue in 2015. In addition, a data column is used to show the 2015 growth for the known segments. We also use call-outs, a standard PowerPoint shape, to add details about the data. 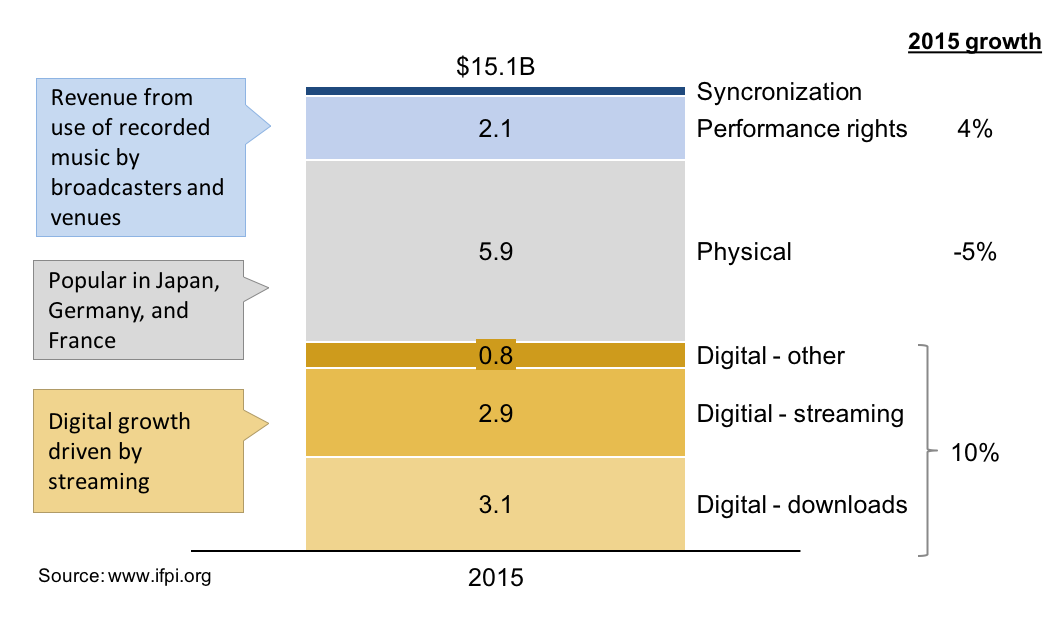 This chart was built using the Aploris charts add-in for PowerPoint Mac.

The Marimekko was built using the Aploris add-in for PowerPoint on a Mac. Data provided by Wikipedia.

The line chart below shows total US viewership for each episode of Game of Thrones. The chart is broken into 6 section each representing a season. The delta bridge is used to show the percentage change in viewership from the start of one season to the beginning of the next.

Has Game of Thrones reached its peak viewership? Season 6 is showing a slight decrease though it could still end strong.

This chart was built using the Aploris add-in with PowerPoint for Mac. Note that the delta bridge is a standard feature with Aploris and that percentages are automatically calculated.

The bar chart below plots the number of hours required to binge watch select popular TV shows. Grey’s Anatomy tops the list with a whopping 164 hours (almost 7 days) needed to watch all the episodes.

For a clean look this chart omits the y-axis. Data provided by Nielsen.

This chart was built using the Aploris for Mac add-in with PowerPoint for Mac. Request a free trial and start quickly building smart, intuitive PowerPoint charts.

The 100% stacked bar charts below explain how Americans spend their average weekday and weekend. The chart includes two data columns that detail the percent of Americans that participate in each of the activities.

This chart was built using a Apple MacBook Pro with Aploris for Mac and Office 2016 for Mac.  The data column is a standard feature with Aploris and does not require manual editing.

The Marimekko chart below shows the total number of viewers from the top 30 American shows during the 2014-15 season. The shows are organized in columns based on the network/channel that broad casts it. The size of each segment is proportional to the total number of viewers. The width of each column represents the viewers each network has (viewers may be repeated across shows).

Big Bang Theory, NCIS, and NFL Sunday Night football have the largest number of viewers with about 21M each. CBS shows are the most popular with a cumulative number of 235M viewers.

The Mekko chart below shows the 10 largest worldwide opening weekend movie releases in terms of US$ revenues. Star Wars: The Force Awakens breaks records last weekend even though it hadn’t been released in China yet.

The width of each column is proportional to the total sales. The height of each segment within the column indicates the percent of sales from US and international sources. The labels were set to show both the absolute sales as well as the automatically calculated percent of sales from each source.

Readers can quickly note that about 55-60% of sales typically come outside of the US. The most significant exception is Marvel’s The Avengers which only pulled 47% of its revenue from international theaters.

This Mareimekko chart was created using Aploris. It was built in PowerPoint 2016 on a Mac (OS X).

The Mekko chart or Marimekko chart below shows all the revenue the Star Wars franchise makes across its different product lines. Surprisingly toys and not movies represent the bulk of sales.

The width of each column in the Mekko chart is proportional to the revenue that the product line makes compared to the total sales. Within each column the segment height represents the percent of sales that segment provides to the column/product line. For example, The Phantom Menace represents roughly 20% of all movie sales.

The Mekko chart or Marimekko chart below shows the gross revenue for the top 10 movie franchises. The chart splits the revenue from US and international sources. The width of each column is proportional to the total revenue and the height of each segment represents the percent of the revenue attributed to the defined source (US or international).  In addition, a data row is used to highlight the number of movies in each franchise.

The Mekko/Marimekko chart is a popular chart option in Aploris. You can select it when first creating a chart and Aploris will provide a sample template that you can edit.