The bar chart (A) below shows that billion dollar startups have grown at 81% compound annual growth rate (CAGR) over the last 2 years lead by those in Asia. Asian startups have outpaced other regions growing at 126% CAGR. Across regions both the number of billion dollar startups and the average valuation has increased. Note that foreign exchange rates can also have an impact on valuations. For example, the Euro has become significantly weaker compared to the US dollar over the last two years.

The Mekko chart (B) below provides an overview of the Asian startups by industry. The area of each square is proportional to the valuation of the startup it represents. 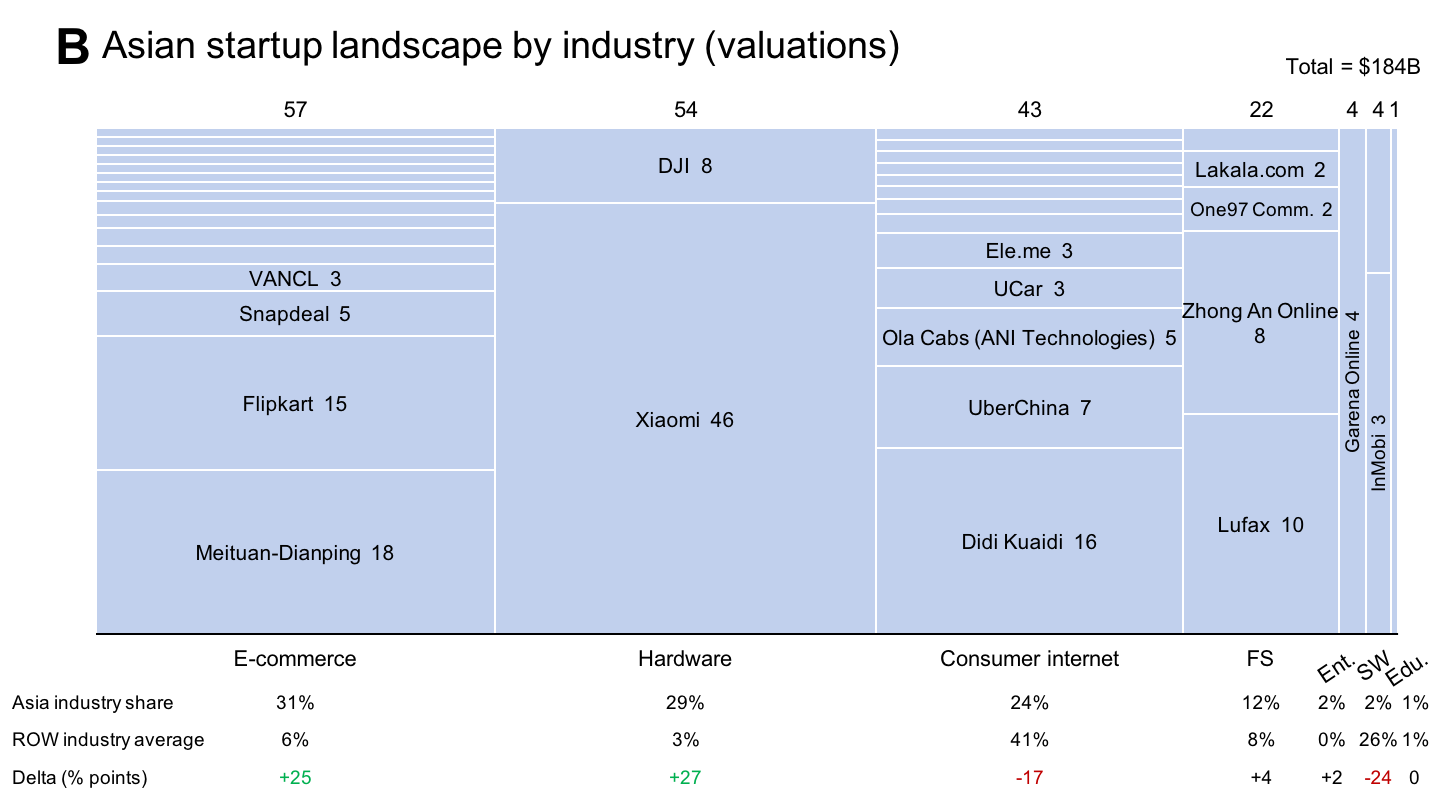 Mekko chart of the Asian startup landscape by industry

Asian startups are largely focused on E-commerce and Hardware, which make up a larger portion of the total landscape than in other regions. E-commerce and Hardware comprise 60% of the total value of Asian billion dollar startups. Surprisingly, there is only one billion dollar startup, InMobi, in the Software industry. In other regions, Software is 26% of the total value but in Asia it only makes up 2%. However, these ratios are subject to significant fluctuation as startups are funded, experience growth, and potentially exit (e.g. go public, get acquired).

The stacked bar chart (C) below shows funding in these startups over the last 2 years. Overall funding has grown at 88% CAGR with the average funding per startup also increasing. Funding in Asian startups is growing significantly faster (128%) than the US (70%) but lagging the smaller Europe (162%). These charts were built with the Aploris PowerPoint add-in. Source data for these charts from the WSJ.

The stacked bar chart below shows the number of votes and comments by Product Hunt users on a monthly basis. In addition, a data row is used to show the number of products featured.

Growth arrows are used to show the compounded monthly growth rate of comments and votes. Over the last 11 months, the growth rate has stalled to 1% compared to the 24% achieved over the previous 12 months.

This bar chart was built in PowerPoint using the Aploris for Mac add-in. Aploris enables users to quickly create a variety of charts including Mekkos and Gantt charts. In addition, with Aploris you can add visual elements like growth arrows, delta bridges, and data rows/columns.

The Marimekko or Mekko chart below takes another look the current billion dollar start ups. Instead of looking at industries as in a previous post, here we look at geographies.

Each column in the Marimekko chart represents a geography and each segment in a column is a startup. The area of each startup is proportional to its valuation. The United States represents over 60% of the total valuation of these startups.

This Marimekko chart was built using Aploris on Office for Mac 2016.

The bar charts below show the break up of US angel investing in 2014 across company stage and industry. Companies in start-up phase and healthcare companies received the largest portion of investments.

The Mekko chart/Marimekko chart below shows valuations of large startups across different verticals. Each vertical is defined as a column with the width proportional to the sum of the values of all the startups in the vertical. Each segment is a startup with its area proportional to valuation.

Uber has the largest valuation at $51B closely followed by Xiaomi valued at $46B. This data is from Wall Street Journal and valid as of November 2015. Excludes startups that have gone public.

Bubble chart showing largest US startups defined as privately owned companies. Companies are plotted along two axes showing current revenue and total funding received so that the ranking is easily visible. No observable trend or correlation exists between both dimensions.

Uber has received exceptional funding. In order not to squeeze other bubbles together an axis break has been used for the x-axis.

A third dimension is added with bubble areas being proportional to the current company valuation. Though exact values are not easy to read, differences are made clear. Technically, a fourth dimension with discrete values is added by grouping bubbles by color. Companies that are headquartered outside the Silicon Valley receive a distinct color.

Bubble chart showing revenue and funding for US startups